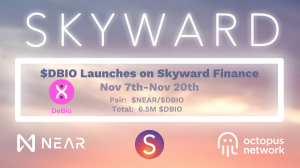 DeBio Network, the first appchain on the Octopus Network, launches on Skyward Finance with 200k $OCT airdrops for IDO participants

DeBio Network is an anonymous-first application-specific blockchain, aka appchain, for medical and bioinformatics data and services which aims to democratize direct-to-consumer genetics & biomedical testing, empower labs of all sizes, and provide anonymous first, at-home biomedical testing. With an impressive lineup of PhD’s and medical doctors as advisors, the biotech startup is partnered with KILT protocol, which enables innovative, industry-agnostic business models around identity.

Skyward Finance is the premier launchpad built natively on NEAR Protocol that offers novel streaming time-based auctions for its token launches which are bot and attack resistant, community-oriented, and truly decentralized. Because sales are split linearly over the course of the token sale, bots’ reaction times are rendered ineffective. In addition, disallowing immediate token reselling in the same pool eliminates the possibility of pump-and-dump events.

Token prices on Skyward are not determined beforehand but rather by demand, resulting in dynamic rates. Depending on the demand, the expected swap ratio for $NEAR/$DBIO may change over the course of the IDO relative to the number of participants depositing $NEAR in the IDO. Auctions on Skyward occur per block (approximately every second). After a user deposits $NEAR, they gradually accumulate $DBIO over the duration of the sale rather than receiving it all at once.

As an IDO participant’s $NEAR is gradually converted into $DBIO, the exchange rate is determined by the demand at the time of auction. In addition, users will be able to claim any converted $DBIO immediately. By the end of the sale, users will have received a final amount relative to their total deposit of $NEAR. Users are able to withdraw $NEAR from the IDO at any time or modify the amount of $NEAR deposited throughout the duration of the IDO.

From November 7th-November 13th, $NEAR holders can deposit their $NEAR in the DeBio Skyward IDO, then the $NEAR begins to convert to $DBIO November 14th and the sale ends on November 20th.

Following the IDO on Skyward.Finance, $DBIO staking and farming opportunities will be available on Ref.finance, a multi-purposes DeFi platform built on NEAR Protocol. NEAR Protocol provides a user experience close to Web2.0 but with a solid foundation of decentralization. With the resources and support from the entire ecosystem, NEAR is rapidly emerging as a prominent financial center in the blockchain world.

The Octopus Network is a multichain network born to bootstrap and run Substrate-based application-specific blockchains, aka Appchains. By providing flexible leased security, out-of-box interoperability, one-stop infrastructure, and a ready-to-be-engaged community, the Octopus Network is unleashing an innovation wave on Web3.0 accessible to all Substrate developers and Web3.0 teams. The Octopus Network is supporting the launch of its first appchain with an airdrop of 200k $OCT, its native token, to participants of the DeBio Network IDO on Skyward Finance.