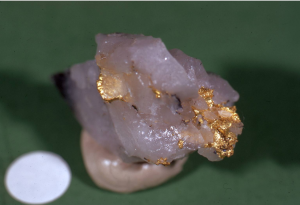 CiRN acquisition is to work to develop the historic mine, with underground workings reported in British Columbia government documents, for gold nanomaterial and gold nanobot technology to be used in developing electricity generation over historic Uranium deposits and occurrences owned by CiRN or acquired in the future through joint ventures or options.

Gold is a superconductor, and was reported in 2008 Los Alamos research to have immediately created electricity as gold nanomaterial absorbed radiation. Gold being a superconductor should be able to be used as an anode or cathode for CiRN proposed ionization plants.

A historic gold sample photo from the historic mine is attached, and British Columbia government records report "…Recovery in 1859 is estimated between 7530 to 112,000 grams of gold based on reported dollar recovery…", and reports, "…A 61-centimetre sample near the south end of the open stope in the lower adit assayed 8.57 grams per tonne gold and 3.4 grams per tonne silver (Bulletin 54, pages 217,218)…".