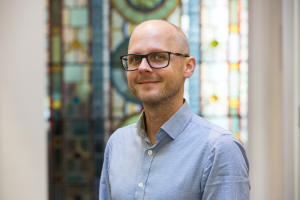 I've long felt that online courses lack a key ingredient that is vital to effective and memorable learning, and that is immersion. Fluentworlds offers completely immersive learning . . .”
— Andy Johnson

Mr. Johnson is a digital learning specialist with 20 years of experience in international education, product development and English language teaching. Among other things, Andy recently completed more than 14 years at the prestigious London School of English. He is particularly interested in generational theory, creativity and self-directed learning, and how organizations adapt to the changing training market and workplace.

“Andy Johnson is one of the most talented individuals in the world of Online Learning. His skills, particularly as they relate to language training, make him the the perfect FluentWorlds leader and ambassador. FluentWorlds admires him for his 20 year track record, his talents, and his superb ability to lead a team in the online language training world," said David R. Bradford, CEO of FluentWorlds.

"I'm very excited to be joining the FluentWorlds team," Andy said. "I've long felt that online courses lack a key ingredient that is vital to effective and memorable learning, and that is immersion. Fluentworlds offers completely immersive learning, and I can't wait to explore the opportunities that gives learners, and how together we can revolutionise the online language learning experience."

FluentWorlds Online Academy allows users to learn in a collaborative 3D setting on their desktop or smartphone with other students in real time. The Online Academy from FluentWorlds has all the benefits of a Skype, Zoom, or Microsoft teams meetings like crystal clear voice, webcam, and screen-share but with the added affordances of virtual environments. FluentWorlds Academy has walkable 3d worlds like a Classroom, Airport, Hotel, NYC's Central Park, Cabo San Lucas, and even Virtual Las Vegas for a much for SOCIAL and engaging experience. Further, the system includes Proximity Based voice, allowing for teachers to create break-out sessions on the same call, maximizing their time with students. Students love to create characters that can run, jump, fly and float while learning much faster than in traditional systems. Engaged Learning is Better Learning.

Dr. Linda Bradford, PhD in Instructional technology and Founder and Chief Product Officer of FluentWorlds, added: "I am absolutely honored that Andy has agreed to join our team. His unique perspective in bringing best of breed products to market in the language world makes him the perfect compliment to an outstanding team of sales and marketing personnel, linguists and computer scientists. Together we can change the world of language training forever."

FluentWorlds product heritage lies in creating language learning products that remove the barriers to achieving English fluency, and in other languages. It is the goal of FluentWorlds to elevate the lives of people around the world through its remarkable language technologies. In FluentWorlds Academy, a student can meet online with a Tutor in group classes or one-on-one via smartphone or desktop while exploring more than 40 virtual adventures so the user is Immersed in the learning environment.

FluentWorlds’ language learning apps have been downloaded by millions of people around the world. The Company has one of the strongest suite of language learning products, including 3DMeet.com, Academy.FluentWorlds.com, FluentViewer, PerfectAccent, and 3dCurriculum. The FluentWorlds’ community includes operations in 6 countries worldwide. Please visit www.fluentworlds.com for the latest information about FluentWorlds and its products.