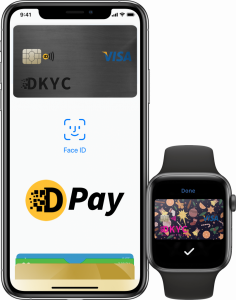 With DPay, consumers can directly spend their tokens from the Binance Smart Chain (BSC) anonymously because the need to cross chains, pay outlandish merchant fees or wait around for payment confirmations has been eliminated.

Businesses can be paid instantly in fiat currency on demand or stake DKYC (Don’t Know Your Customer), which is launching DPay, for generous returns. In addition, businesses won’t have any barriers to adoption because there are no proprietary applications or hardware setups required.

According to a spokesperson, the DKYC ethos is to offramp crypto to fiat microtransactions with anonymity, without users having their spending tracked by third parties and bad actors. DKYC is well-positioned to replace archaic credit cards that can take time to process, charge merchants’ high fees, have high rates of failure, and make transactions unnecessarily complicated.

Every spend on DPay will be paired with an automatic, contract-based, buyback-and-burn of the DKYC token to gradually make it deflationary while insulating its chart. The more holders spend in the real world using DPay, the scarcer and more valuable the token becomes.

DKYC also plans to release the world’s first fintech NFT series with utility. The upcoming DKYC Financial Freedom NFT series comprises a collection of striking, hand-illustrated designs that will graphically convey themes of financial freedom, anonymity and guiltless spending. There will be special, limited-edition NFTs around notable figures who promote financial liberation and special holiday season releases. Guest illustrators will also pen these exclusive works. Each NFT will be a graphical statement and a flair item for the holder to proudly spend while declaring their fight against global financial inequality.

The series of DKYC NFTs will also have an embedded range of unique financial perks. Many will be paired with a usable DPay balance such as an ultra-rare card that is expected to unlock $1,000 of DPay each quarter over two years. There will also be an in-built staking system to allow holders to earn rewards while they hold their NFTs. These NFTs will eventually be tradeable via popular NFT exchanges.

DKYC is already functional, disrupting finance and changing lives, the spokesperson said, as the company seeks to make DKYC the global standard for financial freedom everywhere, now and for the future.

DKYC cards have already been used anonymously by holders for thousands of purchases, including groceries, bills, health insurance, medicines, software services, gaming and other entertainment, dinners and more.

There’s an invasion of our privacy each time we transact and spend money. There’s an expectation that we have to part with information about who we are, where we live, what we buy, and where our money came from, said the spokesperson, who added that DKYC wants to protect DeFi, or decentralized finance, and the right to privacy for microtransactions, at all costs.

DKYC will soon be available on Solana, the fastest blockchain in the world and the fastest-growing ecosystem in crypto.

For more information about DKYC and its efforts to protect financial freedom, visit dontkyc.com.