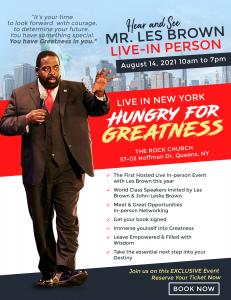 Les Brown Kicks off his Hungry for Greatness tour!

Motivational Speaker Les Brown hosts the first stop of his Hungry for Greatness tour. Star studded event highlights the accomplishments of Brown and his legacy.

ATLANTA, GA, UNITED STATES, July 29, 2021 /EINPresswire.com/ — As the pandemic slows down, and the world re-opens, Mr. Les Brown, one of the world's most influential and impactful motivational speakers, who has helped millions of people to rise up from their circumstances for over 3 decades, is hosting his first live in-person event this year. "This event is extremely special to me, not only do I get to host amazing artists and speakers, I also get to share the stage with my youngest son, John-Leslie, and my talented grandson Honor, as I see my legacy pass on to the next generation in my family and in the speaker community", says Les Brown.

The event is stop one of the Hungry for Greatness Tour. The event will be held on Saturday, August 14th in Queens, NY at the Rock Church, 57-02 Hoffman Drive, an iconic staple in Queens community.

The event is inspired by the Brown Family's Hungry to Speak program which is an online speaker training program. Mr. Les Brown says, "Wanting something is not enough. You must hunger for it. Your motivation must be absolutely compelling in order to overcome the obstacles that will invariably come your way."

As a renowned public speaker, author, and television personality, Les Brown has risen to national prominence by delivering a high-energy message which tells people how to shake off mediocrity and live up to their greatness. "The coronavirus created a dramatic shift around and has transformed the way we live our lives and the way we do business.

“Millions struggle to make ends meet. It's hard out there right now. People have been through so much and we need to give them a little hope to continue on", says Mr. Les Brown. Mr. Brown has spent his time during the pandemic reaching out to his students throughout the world giving them hope to preserver and push past any obstacles, to continue on to live out their destinies.

Acclaimed Author Les Brown is not only an internationally recognized speaker and the CEO of Les Brown Enterprises, Inc., he’s also the author of the highly acclaimed and successful book, Live Your Dreams, and former host of The Les Brown Show, a nationally syndicated daily television talk show which focused on solutions rather than problems. Les Brown is one of the nation’s leading authorities in understanding and stimulating human potential, utilizing powerful delivery and newly emerging insights to teach, inspire and channel people to new levels of achievement.

Click here to purchase tickets to this amazing event. You don’t want to miss out on this opportunity!