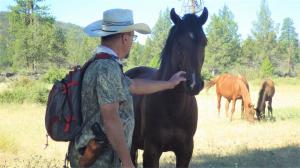 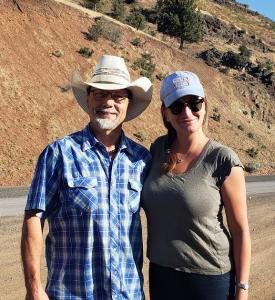 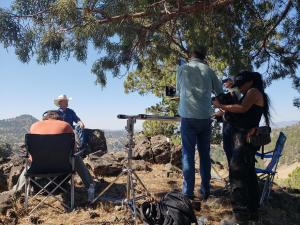 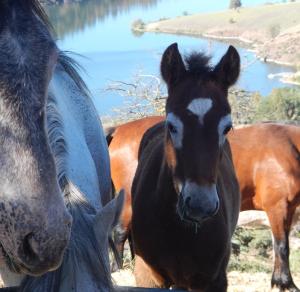 One of the amazing wild horses at Wild Horse Ranch

YREKA, CALIFORNIA, UNITED STATES, July 29, 2021 /EINPresswire.com/ — “I was outside my cabin in the serenity of the mountains visiting with a few of the local wild horses when a text popped up on my phone saying; ‘Hello William! This is Ashley Avis…’

At first, I did a double-take trying to figure-out which one of my friends might be trying to prank me.

Then, when I received an email from Ashley's company, Winterstone Pictures, I wondered why the Director of ‘Black Beauty’ was trying to contact me.”, said naturalist William E. Simpson II

Ashley Avis is an American director, screenwriter, and producer of four feature films and over 100 commercials and branded content spots to date.
She recently wrote, directed, and edited the modern-day adaptation of Anna Sewell's classic BLACK BEAUTY starring Kate Winslet, Mackenzie Foy, and Iain Glen in the fall of 2019 for Constantin Film, which aired on Disney+ on November 27th, 2020.

She is also currently writing and show running a television series based on the iconic Breyer toy brand for Ron Howard, Brian Grazer, and Stephanie Sperber of Imagine Entertainment.

“As I learned later, Ashley and her film crew had been on the road for thousands of miles across several western states filming on a month-long expedition. And they happened to be passing near the Soda Mountain wilderness area and Wild Horse Ranch where I live.

As soon as I met Ashley, I knew her passion for wild horses was honest and pure. I was very pleased to hear that Ashley wanted an on-camera interview about my perspectives regarding how wild horses might be saved?

Since Ashley, her production team and her documentary effort are currently collecting facts and perspectives from many sources, no particular wild horse management paradigm or opinion is currently being endorsed.

And as I learned, her goal was to have my interview as a part of her new documentary ‘Wild Beauty – Mustang Spirit of the West’."

We started the morning with an on-location interview in the mountains at Wild Horse Ranch with wild horses nearby, and finished the day filming some of the natural wonders of the Klamath River Canyon”; continued Mr. Simpson

An excerpt from Ms. Avis’s website below discusses the start of her odyssey and critical mission to help save America's wild horses during what might be described as the darkest hour for native species American wild horses, even as the Bureau of Land Management is engaged in the largest roundup of wild horses in recent history:

“Last year (2019), we began filming a new project in the wilds of Utah, Nevada, and Wyoming… driving out to some faraway places searching for wild horses. This documentary initially began as a much simpler envisioned trip to capture real, authentic footage of wild horses that we could infuse into our narrative feature Black Beauty, to root Beauty in the American West given we were filming most of the movie in South Africa (which doubles extremely well for much of the United States).

There has been such extraordinary serendipity with these projects, and instead of just capturing a few days of b-roll, we ended up having the opportunity to film two weeks of spectacular footage – both the ghostly beauty of these wild ones free with their families at sunrise and sunset, as well as witnessing the tragedy of several cruel helicopter roundups. Concurrently, as I became more versed about the issues wild horses are facing in our country, I realized we could craft something much bigger, a documentary that could be released after Black Beauty for those who wish to learn more about the cause.”