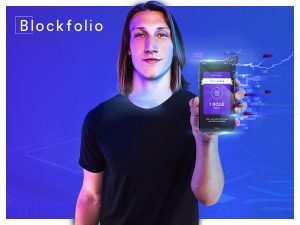 100% of his significant Blockfolio signing bonus has been paid in cryptocurrency directly into Lawrence’s Blockfolio account.

LOS ANGELES, CALIFORNIA, UNITED STATES, April 26, 2021 /EINPresswire.com/ — Trevor Lawrence, who is widely considered to be the consensus first overall pick in this week’s NFL Draft, will partner with Blockfolio, a global cryptocurrency investment app, to help usher in a new era in investing.

This groundbreaking deal with Lawrence marks the first endorsement deal ever in which a significant signing bonus has been paid entirely in cryptocurrency. The bonus has been deposited directly into Lawrence’s Blockfolio account and consists of well-known and mainstream crypto investments Bitcoin and Ethereum. Lawrence also has his eye on the future of the crypto industry and has an investment in Solana, too.

“I’m really excited to be joining the Blockfolio team,” said Lawrence. “When it comes to my crypto portfolio, I wanted a long-term partner in the space that I could trust.”

In a draft that is considered rich in elite quarterback prospects, Lawrence stands above them all as one of the most coveted prospects in decades. Coming off one of the greatest collegiate football careers of all time, his resume includes winning the FBS national championship and offensive MVP as a true freshman, when Clemson defeated Alabama in 2018. He followed that up in 2019 with another undefeated regular season, leading Clemson back to the national championship game for a second straight year, and most recently in 2020, he was the Heisman Trophy runner-up.

“Trevor Lawrence is the future of professional football and cryptocurrency is the future of money, so the partnership was a no-brainer,” said Sam Bankman-Fried, CEO of Blockfolio. “But as impressive as Trevor is on-the-field, I was most impressed with his character and charitable focus off the field.”

Bankman-Fried is an “effective altruist” meaning he is focused on giving most of his lifetime earnings to the world’s most effective charities. It is this philosophy that led him to personally donate north of $10 million to numerous charities across the globe and to launch the FTX Foundation in February 2021, which has already earmarked more than $7 million to charity in just under three months. This shared charitable focus by Lawrence and Bankman-Fried means this partnership is not only about promotional efforts, but also affecting real change.

Blockfolio is reinventing the world of finance and cryptocurrency for its consumers. Backed and powered by FTX, one of the world’s largest and most trusted crypto exchanges, Blockfolio believes that trading cryptocurrency should be safe, easy, and free, and that the future of investing should include everyone.