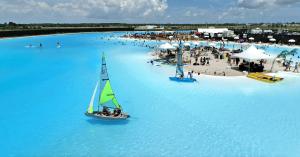 Public Access Lagoons™, the concept and business model created by Crystal Lagoons®, offer rates of return higher than any industry and are operationally replicable anywhere in the world. 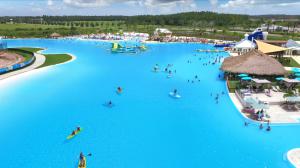 Miami-based Crystal Lagoons is the only company able to bring beach life to every city in the world. The multinational innovation firm has over 2,000 patents in more than 190 countries.

Public Access Lagoons, the business model by Crystal Lagoons, offer rates of return higher than any industry and are operationally replicable anywhere.

The PAL model allures investors due to its commercial versatility, as they can be developed with different investment formats. Even those with minimal initial infrastructure have seen major success”
— Benjamin Fischmann

MIAMI, FLORIDA, UNITED STATES, October 19, 2020 /EINPresswire.com/ — ***Public Access Lagoons™, the concept and business model by Crystal Lagoons®, offer rates of return higher than any industry and are operationally replicable anywhere in the world. With this, the multinational innovation company brings beach life to every city in the world.

The global pandemic is altering recreational activity and tourism, with people prioritizing locations that are close to home and offer adequate sanitary measures. As a consequence, this has generated a necessity for new infrastructure for recreational activities in cities around the globe.

This necessity within urban settings offers a new investment alternative, albeit of a higher complexity. Such projects must be sustainable in times of Covid and the rapid expansion of Amazon, that has promptly taken over countless economic sectors. Investors continue to seek out long-term stability and guaranteed profitability at a time when different industries are seeing their margins reduced. Operations that ensure lucrativeness despite the two above-mentioned threats, will be those that reap the most benefits.

A business that emerges as a safe investment alternative with perpetual income, due to its robustness against such sanitary and commercial pressures, while also offering superior profits in comparison to those obtainable in other industries, are Public Access Lagoons™. Also known as PAL™, the concept and business model was created by the multinational water-innovation firm, Crystal Lagoons®.

“PAL are emerging as an alternative that is proving to be intensive in terms of public assistance, because people are preferring options with sanitary controls. They are Covid and Amazon-proof and, despite a low initial investment, a firm can quickly boast a very high present value, since even while they continue to be built, they generate profits and pyramidal financing,” explains Benjamin Fischmann, Regional Director, US West at Crystal Lagoons.

Interest in investments such as PAL can be validated by their success in Japan, a nation known for its pioneering technology, as well as the United States, Korea, Central America, and Pakistan, among other large-scale licensing agreements that Crystal Lagoons has signed.

In the U.S., while most long-term investments, such as residential, commercial and retail real estate operations have been seriously affected by Covid, the first PAL in Texas (Lago Mar) and Florida (Epperson) have generated unprecedented returns, with daily ticket revenues amounting to US $50,000, reservations selling-out a week in advance and very low operational costs.

“The PAL model has continuously allured investors due to its commercial versatility, as they can be developed with different investment formats, with models offering more or less infrastructure. Even those with minimal initial infrastructure, such as Lago Mar and Epperson in the U.S., have seen major success,” says Benjamin Fischmann.

PAL are anchored by monumental crystalline lagoons suitable for bathing and water sports, surrounded by wide stretches of white sand beaches, which the general public can access via ticketed-entry. The format offering the least amount of infrastructure comprises of a lagoon, a beach and green areas with kiosks for small businesses. The second format, with intermediate infrastructure, also includes a peninsula for wedding ceremonies and can host events, concerts, trade shows, etc. indoors, year-round, with beautiful views overlooking the turquoise lagoon. These in turn can open up additional business areas. The most complete investment model incorporates all of the above and added infrastructure for retail, restaurants and hotels.

“The hotel industry has identified an increase in value in rates and food and beverage consumption up to 200% when hotels include a beach, compared to hotels further inland. Investors have corroborated that, on lower-value land, a hotel with a beach and PAL elements can benefit from very attractive returns,” he adds.

The commercial and sanitary advantages of PAL have sparked the interest of relevant international economic groups, seeking to take next steps so as to secure exclusivity in certain geographic areas through master agreements, which assign an important number of PAL in a specific region.

PAL are a highly valued asset for reconverting dwindling malls and redeveloping retail spaces, while also reactivating foot traffic to entertainment parks, racetracks, golf courses, etc. They are also of interest for companies with vacant land seeking to convert it into a lucrative business.