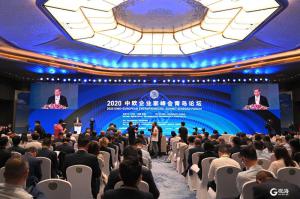 LOS ANGELES, CA, UNITED STATES, September 19, 2020 /EINPresswire.com/ — The 2020 Sino-European Entrepreneurs Summit Qingdao Forum officially kicked off Saturday. Under the theme of “New Changes, New Opportunities, New Economy—Co-build a New Win-Win International Cooperation Pattern under the Belt and Road Initiative”, the forum gathered together Chinese and European entrepreneurs, aiming at probing into new opportunities resulting from new changes and finding out new paths when facing new opportunities. Entrepreneurs have the most penetrating insight into changes that take place in the era and are the most keenly aware of the irresistible trend of changes.

From 2008 on, the Sino-European Entrepreneurs Summit was hosted by European cities including London and Paris. The platform of communication and collision among Chinese and European entrepreneurs and went out of Europe and took place in Qingdao, China for the first time in 2019. Entrepreneurs scrutinized from head to foot this city which is closely connected to Europe, felt German-style lingering charm of Tsingtao beer on their lips and peered into its European-style impressions, deep or shallow.

The solid foundation of cooperation that is well-forged by Qingdao and Europe for a long time displays greater tenacity facing the general trend of opening up under the Belt and Road Initiative. Long Yongtu, former Vice-Minister of the Ministry of Foreign Economic Cooperation and Trade of China and chairman of Sino-International Entrepreneurs Federation, said, “The reason we choose Qingdao is that Qingdao is playing an increasingly important role in the great practice of the Belt and Road Initiative.” The former chief negotiator of China’s WTO entry predicted accurately the pulse of Qingdao that sticks to opening up in the new development pattern.

Seizing the two significant historic opportunities, namely, the SCO Demonstration Zone and China (Shandong) Pilot Free Trade Zone, Qingdao is becoming a new international cooperation platform under the Belt and Road Initiative and standing at the forefront of a new round of opening-up in China. Under the new development pattern of “big circulation, dual circulation”, Qingdao is charged with new missions, specifically, a bridgehead for new opening-up highland in Shandong province, an strategic pivot for national in-depth opening-up in the north region of the Yangtze River as well as a new starting point for European entrepreneurs to perceive the opening-up trend and seek opportunities in China.

Confronting new changes and patterns, this brainstorm of Chinese and European entrepreneurs in Qingdao is bound to clean up mists and steer in the right direction and will join efforts to open a new development path of win-win cooperation.