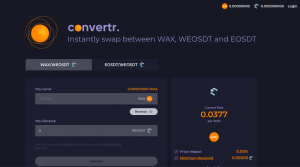 Introduction to EOSDT ON WAX.com and Stablecoins

EOSDT – a Stablecoin is a crucial element for a vibrant DeFi ecosystem on WAX. EOSDTONWAX.com is the portal where it all begins. ”
— Michael Gucci

EOSDTonWAX.com is a DeFi portal where you can transfer EOSDT from EOS to WAX and vice versa. Within the portal, you can also swap WAX to WEOSDT and vice versa.

A stablecoin is a cryptocurrency that is pegged to an asset with a stable value such as gold or fiat money. For example, EOSDT is a stablecoin on EOS pegged to USD. That means 1 EOSDT is equal to 1 USD.

Why do we need Stablecoins?

Cryptocurrencies are extremely volatile. The prices can fluctuate rapidly and unpredictably. For example, the price of WAX hit the all-time high of $2.77 USD in January 2018. Since then the price is down more than 98%. This extreme volatility prevents mass adoption. From a consumer perspective it is risky and impractical to use volatile assets for daily use. With stablecoins, you don’t have to worry about instability and volatility of cryptocurrencies.

Buying items with a stablecoin ensures that you are not overpaying.

DeFi is short for Decentralized Finance. The goal of DeFi is to restructure the banking system for the whole world in an open and permissionless way. We interact with DeFi everyday – some examples are stablecoins such as EOSDT and decentralized exchanges such as NewDex and Defibox.

EOSDT is a stablecoin on EOS pegged to USD. You can buy EOSDT on one of the exchanges or generate EOSDT by collateralizing EOS or BTC. EOSDT is insured by Equilibrium Stability Fund.

How can I move EOSDT on EOS to WAX?

EOSDT can move back and forth between EOS and WAX using a IBC bridge developed by Malta Block. EOSDTONWAX.com is the portal that uses this bridge to move EOSDT back and forth.
Go to EOSDTONWAX.com and click on the EOSDT/WEOSDT tab.
You can login with Scatter or Anchor to complete the transaction.

Is there a fee for using the IBC bridge?

There is a 0.2% fee for using the IBC bridge to transfer EOSDT from EOS to WAX or vice versa.

When would I use the IBC bridge vs. buying WEOSDT on WAX?

If you already have EOSDT on EOS and want to use it for interacting with platforms such as Phoenix, you can use the portal to transfer the EOSDT to WAX.

When would I use the swap contract to buy or sell WEOSDT?

EOSDTONWAX.com is the portal where you can swap WAX to WEOSDT (EOSDT on WAX). There are two situations where you may want to use the swap contract:
a) You want to interact with a platform such as Phoenix, but don’t want to go to the EOS side to buy EOSDT. In this case, you just swap WAX to WEOSDT within the portal.
b) Hedging mechanism for traders: Hedging simply means to reduce the risk of adverse price movements. For example, let’s say that you bought WAX at $ 0.04 USD. If the WAX price goes up to $ 0.08 USD, you may want to lock in profits by moving in to WEOSDT. When the price retraces to $ 0.04, you can sell WEOSDT and will have more WAX than you started with.

To swap WAX to WEOSDT, go to EOSDTONWAX.com and click on the WAX / WEOSDT tab.

You can login with WAX Cloud wallet, Scatter or Anchor and complete the transaction.

Is there a fee to swap WAX to WEOSDT and vice versa?

There is a 0.3% fee for using the portal to swap between WAX and WEOSDT.

EOSDT – a Stablecoin is a crucial element for a vibrant DeFi ecosystem on WAX. EOSDTONWAX.com is the portal where it all begins.

About Malta Block
Malta Block is a guild on the WAX blockchain. In addition to maintaining a top-notch block production infrastructure, we offer a wide range of services – from token smart contract design and creation, to managing the resources needed for an airdrop such as RAM and CPU, as well as taking care of all the details that go into conducting a successful airdrop.
Malta Block also offers services as a DAPP Service Provider (DSP) on WAX.