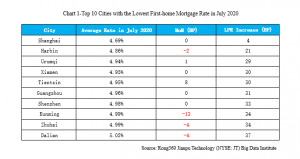 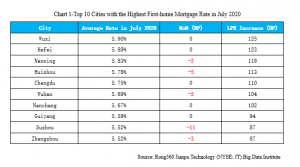 In terms of price, on July 15th, the PBOC injected RMB400 billion into the market via a medium-term lending facility (MLF), keeping the rate unchanged at 2.95%. In terms of past routine, the change in MLF rate used to have a strong guiding effect on LPR quotation. From a policy perspective, the PBOC lowered the refinancing and rediscount interest rates in the early this month, signaling a more flexible monetary policy to lead up to a downward trend in the financing cost for the real economy as LPR is not the only tool. Given the above, it is expected that the LPR on July 20 will remain unchanged with low possibility for LPR to go down.

On the other hand, for the property market, Hangzhou, Ningbo, Dongguan, Shenzhen and other overheated markets have begun to tighten the regulation for property market entering the second half of the year. In particular, Shenzhen's "715 New Policy" is recognized as the strictest property market regulatory policy in the city. "House is for living not for speculation" and "Prohibition of illegal inflow of consumer loan funds into the property market" have been frequently mentioned by regulatory authorities recently. In addition, as the nationwide mortgage rate has dropped over 20BPs this year, far more than the LPR’s decline, local market interest rate pricing self-regulatory organizations are likely to be more cautious on increasing or decreasing mortgage interest rates, so as to avoid a stimulus on the market sentiment. In summary, the mortgage rate may remain steady along with slight volatility in future.