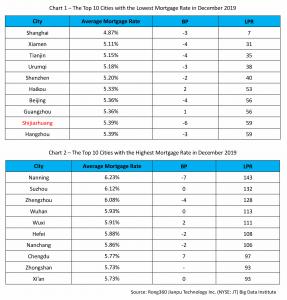 On November 20th, 5-year LPR initially declined by 5 BP to 4.80% at the fourth quotation. Though approaching to the end of the year, many banks adjusted the rate as followed.

Ranking: the Range of Cities with Low Mortgage Rate Expands

In December 2019, expect Haikou and Guangzhou, the other cities ranking in top 10 with the lowest mortgage rate declined the rate. Shijiazhuang declined by 6BP and made Zhuhai be out if the top 10. The mortgage rate of Zhongshan city, which is newly included in the top ten, is 5.73%.

In December, the topic, House is for living not for earning, was emphasized again in the Central Economic Working Conference. Ministry of Housing and Urban-Rural Development added a long period validity of the policy when deployed the relative work in 2020，which highlighted the policy will exists as a regulatory norm.

At the same time, as approaching the end of the year, many regions are implementing the “Different City Enforces Different Policy” gradually, and real estate market policies have begun to be adjusted. A dozen of second-tiers cities like Tianjin, Nanjing, Wuhan, Sanya and Foshan lower the threshold of house buying for talent people, which insert the energy for the real estate market with watching the expecting status. In December, Nansha District, Huadu District and Huangfu District of Guangzhou released announcement to relax the talent purchase restrictions, becoming the first and only first-tier city to adjust its housing policies. In Shenzhen, due to the blessing of a number of favorable factors such as the "First Demonstration Zone" and the "Adjustment of the Standard of Ordinary Houses", some second-hand housing prices rose fast. In response, the Shenzhen Municipal Bureau of Housing and Construction issued a special notice to crack down on illegal activities such as driving up housing prices.

On December 20, the latest LPR quotation has not changed, but considering the current economic situation, there is still decline room in the future. Under the circumstance that the talent policy is relaxed in many places and the market capital is relatively loose, the mortgage interest rate of Banks will be lowered along with LPR next year. However, the range and speed of the downward adjustment will be relatively slight, and a stable development will remain the main theme of the real estate market in 2020.