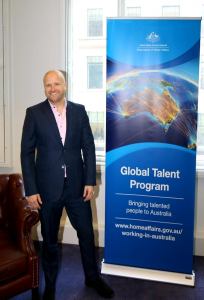 BRISBANE, QUEENSLAND, AUSTRALIA, December 9, 2019 /EINPresswire.com/ — ​DayTek Capital is excited to announce that its Co-Founder and CEO, Will Banks, has been granted permanent residency to Australia. Mr Banks is the first in Europe to have been granted a visa under the Global Talent Independent Program, which is only awarded to individuals who are internationally recognised in a future focused sector. The issuance of the Global Talent visa to Mr Banks, which on this occasion took 3 weeks from lodgment to grant, clearly demonstrates Australia’s commitment to supporting talented individuals from key industries and the companies they represent to establish a presence in Australia. Mr Banks and DayTek Capital are building “Infinity,” the first neobank to be based in the state of Queensland. With a vision of becoming the first “product-disruptive” bank in Australia, DayTek Capital plans to launch Infinity in the first half of 2020.

Mr Banks is already known in the Australian neobank market and has dedicated over twenty-five years to building and advising regulated and non-regulated start-ups and multinational businesses. These have ranged from challenger banks and traditional banks, to electronic money institutions, brokerage and technology firms, to consultancies and governments, in the UK and abroad. He has demonstrated a successful track record and well-earned reputation, as an energetic, entrepreneurial, results-driven and highly accomplished senior business leader.

In reaction to his visa, Mr Banks said, “I am very thankful to have been granted a visa of this type and would like to thank the federal government and Trade & Investment Queensland, for their incredible and tireless support, together with Emergico for their assistance. I am extremely excited to be moving to the sunshine state with my family and am very much looking forward to embracing the fantastic Australian lifestyle, culture and people.”

The Global Talent Independent Program was officially launched last month to attract highly skilled migrants in selected industries to Australia. At the time, Minister for Immigration, Citizenship, Migrant Services and Multicultural Affairs, David Coleman, stated that the new program has the potential to have a transformative impact on the Australian economy.

A spokesperson for the Australian Department of Home Affairs said, “the Australian Government is committed to attracting top talent in key growth industries, which will both benefit the Australian economy and provide opportunities for international businesses to scale up or expand into Australia”.

DayTek Capital is currently gearing up to submit its financial services licence to the Australian Securities and Investments Commission (‘ASIC’) in the coming weeks and remains committed to providing Australians and Queenslanders with a home-grown bank that is a real alternative to the traditional banking model.