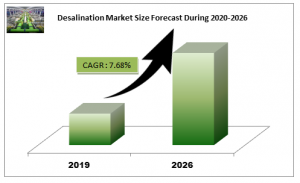 SOUTHLAKE, TX, UNITED STATES, December 10, 2019 /EINPresswire.com/ — The surge in demand for fresh water supplies across the globe addressed by increasing populations, industrialization, and pollution is estimated to shape the Desalination Market size at a CAGR of 7.68% between 2020 and 2026.

The water scarcity crisis, environmental concerns, and the spurring the need for recycling wastewater are identified as key market drivers to contribute to the global desalination market growth, notes Og Analysis.

With potential to remove salt and other minerals from saline water, Desalination Market outlook is analyzed across key market applications and emerging market technology segments which provide desalinated water as an alternative water source.

The technological advancements to desalinate water with energy efficiency, penetration of energy RO membranes, and emergence of hybrid recovery devices, as well as thermal desalinating systems, is set to momentum to the market value during the forecast period.

Further, Increased installation of desalination plants worldwide and the rising demand for potable water thrust the market growth. Accordingly, the drought-prone regions such as Middle East and Africa which lack fresh water resources and limited supply of potable water are the key region to trigger desalination market growth opportunities.

Based on regional prospects, desalination market is expected to have steady growth across Asia Pacific driven by high populations and industrialization in developing countries such as China and India and also from developed countries such as Japan and Australia.

Market diversification will drive growth. The most successful companies will be those that find market niche technologies that produce fresh water.

Although there are many prospects in this market, challenges such as seawater intrusion and withdrawal of unregulated amounts of water from the aquifers remain a crucial factor negatively impacting the market growth. In addition, health hazard because of improper water treatment is another major market challenge. To counterbalance with the challenges, initiatives taken up by governments including Water Management Action Plan and the Environmental and Resource Efficiency Plan in Australia, and the US Environmental Protection Act is among major market trend contributing to the market growth.

Emergence of key end-users (Municipal, Industrial and Others) is set to boost the market value

The MSF, RO and MED processes are at more mature and developed stages across drought-prone regions to be integrated with solar energy to cater to the potable water need.

The desalination plants using nanocomposite RO membrane technology have the potential capacity to produce 120 Mn gallons a day of drinkable water by 2024, estimates researchers. Accordingly, Acciona, S.A is working on a 210,000m³ seawater RO desalination plant in Al Khobar that is one of the largest in the kingdom to use RO technology.

The installations of RO and MSF technologies is dominated by the Mediterranean and Middle East region, despite being energy-intensive it's potential to output fresh water across oil-rich resources drives the MSF technology. Countries such as Saudi Arabia, the UAE, Spain, Kuwait, and Algeria were the main contributors to this market.

Further forecasts predict that the MSF segment is expected to lose market shares to the MED segment driven by technological advances of MED. Countries such as Germany and Spain are also witnessing an increase in the number of installations in the Desalination industry because of the increased need for clean water.

Middle East and Africa are expected to continue its dominance in the Desalination market, with more than one half of the market share during 2019, driven by low-cost operators and contractors as well as imbalances in water availability.

The extensive support and grants given to the Water industry by governments have led to the growth of desalination market across Middle East and Africa, followed by significant a market share Americas and Asia Pacific.

North Africa is witnessing a rise in the number of investments in the water sector with availability of EPA technology that is likely to boost desalination in the region in the near future.

Market participants are exploring the growth opportunities by product diversification across emerging desalination plants. For instance, in 2019, Adelaide’s desalination plant to make more water available for farmers is a part of the Federal Government’s latest drought-relief package at less than market rates to grow feed for livestock.

Further, in 2019, ACWA Power and MDC Power Holding Company along with the Federal Electricity & Water Authority (FEWA) achieved the financial closure for the 150 MIGD in UAE.

Following the news of, Siemens to offer plant commissioning services and install electrical equipment at eight seawater desalination plants in Saudi Arabia is an approach of market participants investing in upgrade of desalination plants.