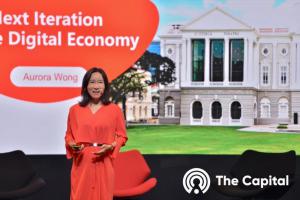 AMERICA, November 14, 2019 /EINPresswire.com/ — CoinMarketCap hosted its inaugural global event, "The Capital" on 12-13 November 2019, in Singapore.
Aurora Wong, Vice President of ZB Group and founder of ZB Nexus, said in her speech that ZB Group is committed to the comprehensive industrial layout of Blockchain, promoting the combination of Blockchain technology and traditional industries, creating more practical use cases, so as to build a real digital economy.

Blockchain is the Key to Developing the Digital Economy

About 500 years ago, science and technology became an important factor to promote human development. The industrial revolution, electrical revolution and information revolution gradually appeared all over the world. Now 5G communication technology has arrived, Big Data and cloud computing are developing rapidly, AI (artificial intelligence) is making great progress every day and Blockchain is no exception.
China's Xinhua Daily reported yesterday that Bitcoin is the first successful application of Blockchain technology. So, what exactly is a Blockchain? What does Bitcoin have to do with Blockchain?
First of all, Blockchain does not necessarily represent Bitcoin. In a narrow definition, blockchain is a distributed database system that is difficult to tamper with. In a broader definition, Blockchain is a machine that builds trust between people.
As instructed by international leaders, Blockchain should be taken as an important breakthrough of independent innovation, and the technological and industrial innovation of blockchain should be accelerated. Blockchain has been drawing wider attention. However, we must be soberly aware that blockchain is still in its early stages of development, with unlimited future potential and limited current applications.

Since its establishment in 2012, ZB.com has been working on large-scale application of blockchain. ZB Group is now a comprehensive service provider involving the upstream and downstream industries of Blockchain. Its business network covers the industry research institution ‘ZB Nexus’, investment fund, crypto-exchanges, e-wallet, etc.
ZB Nexus, established in early 2019, undertakes the mission of accelerating the integration of blockchain technology and real economy and promoting the landing of more actual use cases of blockchain. ZB Nexus offers four product segments — industry research report, digital asset rating, index research and tokenomics lab.
Some time ago, ZB Nexus published a quantitative research report on the degree of decentralization of the mainstream public chain. Based on Bitcoin transaction proportion, node, country distribution, number of developers, number of address holders and mining concentration, also the Gini Coefficient, ZB Nexus evaluates the current degree of decentralization of Bitcoin, which is the price support of bitcoin.
China is advocating that the blockchain should be "removed from the virtual to the real". The general economic research of ZB Nexus will help the traditional industries to combine with the blockchain, which we call tokenization. ZB Nexus can provide whole-process services including demand assessment, technology selection, economic model involvement and incentive mechanism, and promote the implementation and popularization of blockchain in more fields.

Just last week, ZB.com released a new version of its App. In addition to visual interaction upgrades, it also includes social messaging and the ability to send cryptocurrency red packets, allowing users to chat directly with friends and send cryptocurrency red envelopes as if they were using WeChat.
This is an important measure to create user usage scenarios and enhance the element of fun through the blockchain. In 2015, when WeChat launched the red packet function for the first time, the number of new users reached 80 million in the whole Spring Festival, which was a successful reflection of the user's demand. The early Internet also had many bubbles and frauds, but after 20 or 30 years of development, it has already changed every aspect of human social life.
The future of blockchain lies in more and more practical use cases and more and more participants to continuously meet the demand and create benefits.

ZB Group was founded in 2012 with the goal of providing leadership to the blockchain development space and today manages a network that includes digital assets exchanges, wallets, capital ventures, research institutes, and media. The Group’s flagship platform is ZB.com, the industry leading digital asset exchange. The platform launched in early 2013 and boasts one of the world’s largest trading communities.
ZB Group also includes ZBG the innovative crypto trading platform, and BW.com, the world’s first mining-pool based exchange. Other holdings include wallet leader BitBank, as well as exchange brands ZBM, ZBX and Korea’s Bithi.
Industry intelligence and standards are headed by the recently launched ZB Nexus who embody the core values of ZB Group and open source their reports and analysis for the public.