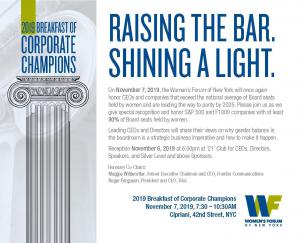 The Women’s Forum of New York salutes the 2019 Corporate Champions for raising the bar for gender-balanced boards and inspiring others to accelerate the pace of change towards parity.”
— Janice Ellig, Ellig Group CEO, Breakfast Corporate Champions Founder

NEW YORK, NY, UNITED STATES, June 18, 2019 /EINPresswire.com/ — The Women’s Forum of New York will host the fifth biennial Breakfast of Corporate Champions on November 7, 2019 in New York City to honor the S&P 500/Fortune 1000 companies which have achieved 30 percent or greater female representation on their corporate boards. This benchmark event brings together more than 600 thought leaders and change-makers including CEOs, Board Directors and government officials in support of the shared goal of gender parity in the boardroom by 2025.

“As an organization of top women leaders, the Women’s Forum of New York salutes the 2019 Corporate Champions which are raising the bar for female board representation by actively seeking more women directors,” said Janice Ellig, CEO of the Ellig Group and Chair and Founder of the Breakfast of Corporate Champions. “We salute these game-changing CEOs for accelerating the pace towards gender-balanced boardrooms and inspiring others to follow."

The 2019 Breakfast of Corporate Champions Honorary Co-Chairs are Roger W. Ferguson, Jr., President & CEO, TIAA and Maggie Wilderotter, former Executive Chair and CEO of Frontier Communications. They will be joined by an impressive line-up of leading CEOs and Directors who will speak on why gender balance in the boardroom is a strategic business imperative and how to accelerate the path toward parity, including:

Awards will be presented to 323 corporations which have successfully accelerated the advancement of women on corporate boards by achieving and exceeding 30 percent female board representation. One company and CEO will receive the Muriel F. Siebert Leadership Award for achieving 50/50 gender parity and implementing policies and actions that inspire others to follow.

The 2019 Breakfast of Corporate Champions takes place on November 7, 2019 at Cipriani 42nd Street, in New York City from 7:30am – 10:30am. To learn more about the event, review sponsorship opportunities or purchase tickets to attend, visit: www.womensforumny.org

About the Women's Forum of New York

The Women's Forum of New York is the city's premier organization of women leaders. The invitation-only membership of more than 500 women represents the highest levels of achievement across all professional sectors from finance to fine arts. The organization is dedicated to the advancement of women's leadership through programs which enrich members' lives both personally and professionally, through The Education Fund, which enables talented women whose potential has been disrupted by extreme adversity to resume their education, and through the Corporate Board Initiative, which extends and expands the contribution of women leaders through corporate board participation. Founded in 1974, the Women's Forum of New York is the flagship of the International Women's Forum, a global organization of over 6,500 outstanding women leaders in over 74 Forums around the world.