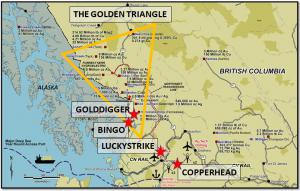 Goliath Resources Limited (TSX-V: GOT) highly prospective for major Gold, Silver, and Copper discoveries of significance as indicators are strong.

Goliath will start drilling in high-grade mineralization — the only question is how deep and what grade. The share share price of GOT.V appears to be a coiled spring.”
— Mining MarketWatch Journal

NEW YORK, NY, UNITED STATES, June 19, 2018 /EINPresswire.com/ — Goliath Resources Limited (TSX-V: GOT) (Frankfurt: B4IE) is the subject of a Mining MarketWatch Journal review. Goliath Resources offers one of the best opportunities for extraordinary gains in the resource sector at the moment as it prepares to drill two of its four properties proximal to the Golden Triangle in British Columbia. The virgin targets which were previously under glaciers that only recently retreated are exposing exceptional Gold, Silver, and Copper mineralization at surface. GOT.V share price is apt to rise into drilling as the target indicators are of such quality it appears Goliath has potential to realize significant resources;

2) the Copperhead Property will see exposed volcanic breccia targets drilled starting in 8% Copper and 45 g/t Silver mineralization at surface — the only question is how deep and what grade.

Full copy of the Mining Journal Review may be viewed at http://miningmarketwatch.net/got.htm online.

Both of Goliath's properties are highly prospective for major discovery from upcoming drilling this Summer-2018. The Copperhead Property has widespread highly mineralized volcanic breccia at surface, and Goliath's Lucky Strike Property's Prosperity Bullseye Zone, besides quality placer, also has a huge soil sampling grid that ticks all the boxes for porphyry, SkyTEM affirms this belief with the potential to be massive. In fact, the Prosperity Bullseye Zone has high-grade multi-ounce silver, and almost one ounce gold in bedrock at surface, with zinc, copper, and lead, which appears to be the by-product of a porphyry engine down below — this porphyry appears to have caused pollymetallic quartz veining at surface which has been documented.

A very real possibility exists for investors to experience a major appreciation in share price when a discovery is announced. Analogies for what GOT.V investors have potential to see are what happened to the share prices of GT Gold Corp. (TSX-V: GTT — $0.20 to $2.76) and Garibaldi Resources Corp. (TSX-V: GGI — $0.12 to $5.27) when they hit their discovery drill holes in 2017.

GOT.V currently has a market cap of ~$23.68 million (~84.6 million shares outstanding recently trading at $0.28/share), ~155M fully diluted (with most warrants at ~$0.18 strike price, exercising of warrants will bring in ~$11.5 million to the treasury to fund most of 2019). Entering the Summer-2018 Goliath Resources is cashed-up (having raised ~$3M in an oversubscribed financing in Q2-2018) to complete all its 2018 drilling and exploration plans. The current share float is closer to only ~33 million, there is believed to be a very large contingent of strong hands going into drilling later in 2018 — the share price is apt to rise substantially pending fireworks.

The backstory on Goliath Resources Limited:
The Founder, President & CEO of Goliath Resources is Roger Rosmus, MBA. He optioned the Company's 4 projects from the J2 Syndicate. The J2 Syndicate had explored from Terrace BC all the way North to the Yukon boarder, specifically looking for original elephant-size potential discoveries resulting from glacial and snowpack recession. Having funded the founder of the J2 Syndicate for many years (Mr. Rosmus is an individual well known in the mining industry for financing/nurturing mining ventures to successful fruition/hand-offs for decades, making money for investors), he had first dibs on the most prospective of J2's properties in 2016. Goliath Resources Limited was incorporated in February of 2017, and $2.2 million was privately raised (they had orders for $3.2 million); most of the people that were putting money into the deal were mining engineers, geologists, and people from the industry that could recognize that Goliath had something really special. All four properties have widespread high-grade mineralization of gold, copper, and/or silver at surface, in bedrock, splattered everywhere — the bulk of the $2.2M went into the ground in 2017, exploring the ground on its four properties that had previously been hidden under glaciers for the last 15,000+ years and were being seen for the first time.

Goliath Resources' M.O.:
The Company's business model is looking for new elephant-size projects that will tick all the boxes for senior mining companies to do a strategic investment, JV, and/or a potential take-out. Goliath is essentially a 'project generator', it has no intention of taking anything into production. Goliath will take its projects as far up the value curve, as far as it can, and at some point hand it off to the mining engineers and its job is done. 'Probability of success' is what Goliath is looking for.

Quality people are behind the management, governance, and technical team:
We urge readers to view the CV's of key people at the bottom of the Mining Journal article, it is an impressive assemblage of talent. E.g.; Goliath's Senior Exploration and Corporate Development Consultant, Bill Chornobay, has seen a lot of press. He was lead on the team that discovered the Golden Mile in Ontario, which eventually got taken out by Argonaught for $327 million. He originally discovered the Coffee Creek asset up in the Yukon, the Supremo Zone, which was ultimately bought out by Goldcorp for $520 million. A couple years ago he did a $53 million JV with Newmont Mining on his brand new discovery that he generated in the Yukon. He has a proven track record with well over $1 billion in value by following this model that zeros-in on the big and obvious, that tick the boxes for majors, and intends on replicating success for Goliath Resources.

Full copy of the Mining Journal Review may be viewed at http://miningmarketwatch.net/got.htm online.

Articles, excerpts, commentary and reviews herein are for information purposes and are not solicitations to buy or sell any of the securities mentioned.