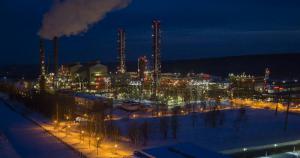 KREMS, AUSTRIA, June 18, 2018 /EINPresswire.com/ — Metafrax PJSC, one of the largest producers of methanol and its derivatives, has approved a new development strategy for the period up to 2030. According to Roustamov Seyfeddin, its beneficiary owner, the holding launches several investment projects that will enable the company to hold technological leadership and expand its sales market. The most ambitious investment project is the construction of a plant for producing ammonia, carbamide and melamine in Gubakha (Perm Territory, Russia) for the total cost of more than one billion US dollars.

Roustamov Seyfeddin:
"Ammonia, carbamide and melamine are the key components of our products, primarily the resins. One of our main objectives is to become the number one in the resins market."

The second investment project is aimed at financing a new production facility located on the production site of Metadynea Austria GmbH (Krems, Austria). The first project stage is worth 10.5 million euros.

Roustamov Seyfeddin:
"We synthesized a product for the tire industry that ensures the wear resistance of tire, improves braking features, and increases the tire safety. We have already made successful trial sales. Our target market is the entire Europe. The current production volume is about 1,000 tons per year, but it will be further increased."

Finally yet importantly, the third large product is designed to expand the holding sales in the east asian market. In the beginning of the year 2018, Metadynea Trading, incorporated in Metafrax PJSC, and a Korean company Sunghong have established a joint venture named SamyangMeta Ltd.

Roustamov Seyfeddin:
"The Asian market remains one of the few that show a significant continuous growth. We expect to increase sales of Metafrax products in the Asian markets. Moreover, we are considering the possibility of introducing a product, which is not yet included in our product line, the paraform. It is highly demanded in Asia."

Metafrax is one of the largest Russian producers of methanol and its derivatives. The company supplies its products to more than 20 countries.

Seyfeddin Roustamov is an energy and chemicals industry professional, developer, investor and philanthropist. In 2014 Mr Roustamov became the major shareholder of the chemical company Metafrax.